There have been lots of conversation on whether the pandemic and its social and economic consequences will lead to faster or slower growth in population. I have been looking into a wide range of measures to identify potential lead indicators of population growth over the last nine months.

The first plot shows the trends for MBS item 73806 which is a basic pregnancy test covered by Medicare.

I understand that there will not be a complete correlation between the number of pregnancy tests done and the number of births. Not every pregnancy test means a child will be born and on the other hand a pregnant woman may have more than one test. This article attempts to use the data available to help understand a phenomenon that otherwise is hard to quantify.

According to the figure, TAS and to an extent NT seem to be the only jurisdictions where the trend has recovered to its historical level. The ABC published an article recently titled Could Tasmania be having the predicted COVID-19 baby boom?. The article, in line with what you can see in the plot, states that “while the baby boom predicted in the early stages of the COVID-19 lockdown in Australia may not have eventuated, Tasmania seems to be bucking the trend.”

On the other hand, the most populous states in Australia seem to be experiencing a rather large decline in their test numbers compared to last year. This plot does not help with quantifying the level of decline so let’s look at the data differently. 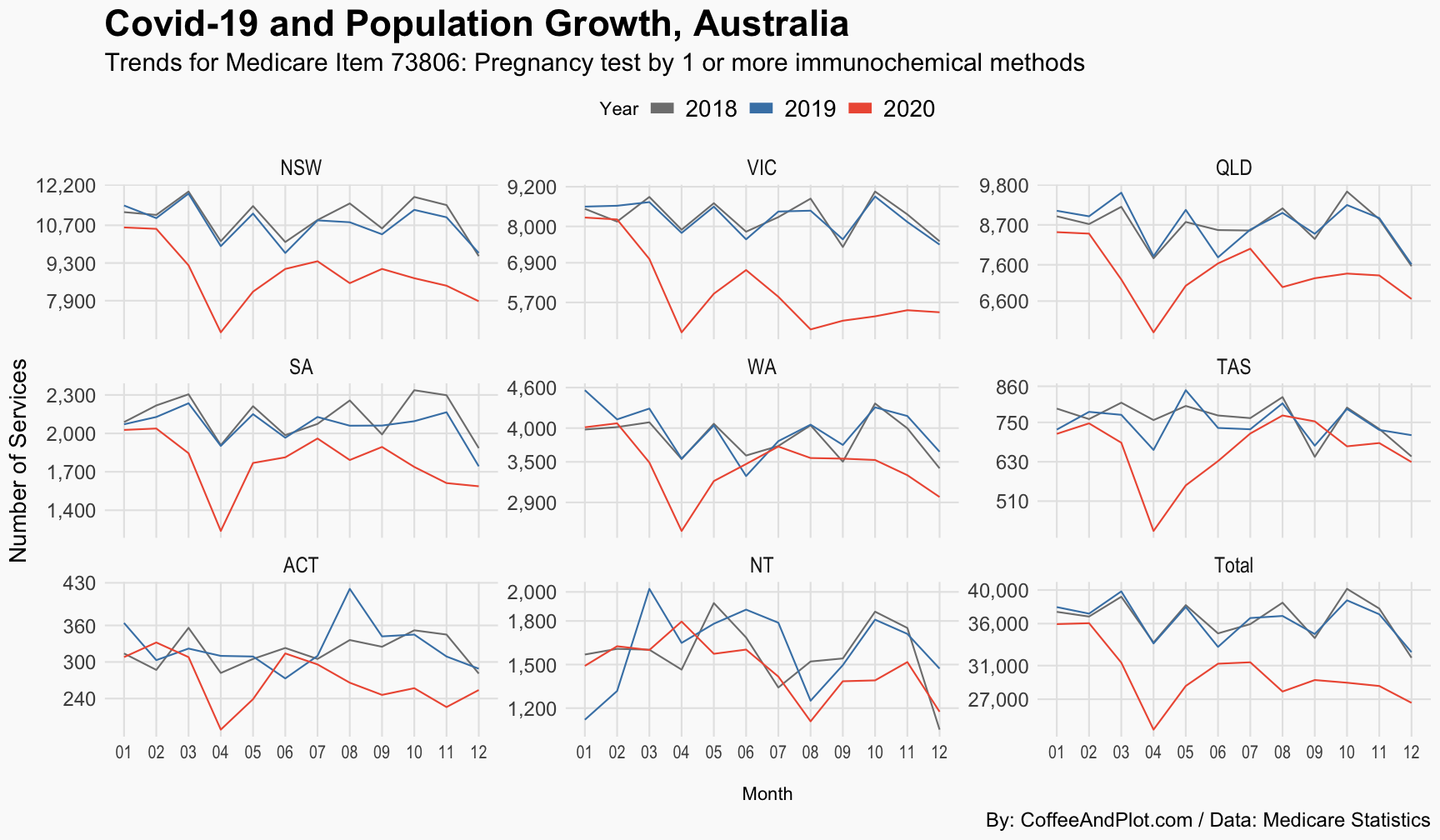 Here, I compare the 2020 pregnancy test numbers with the average of 2018 and 2019 numbers per month. So, for example, if you see the line to be on -5% here, it means that the number of pregnancy tests, in that month for that location declined by 5% compared to the average number of tests in the same month and location in 2018 and 2019. The recent increase in the number of tests in Tasmania is well visible here when compared to other jurisdictions across the country. 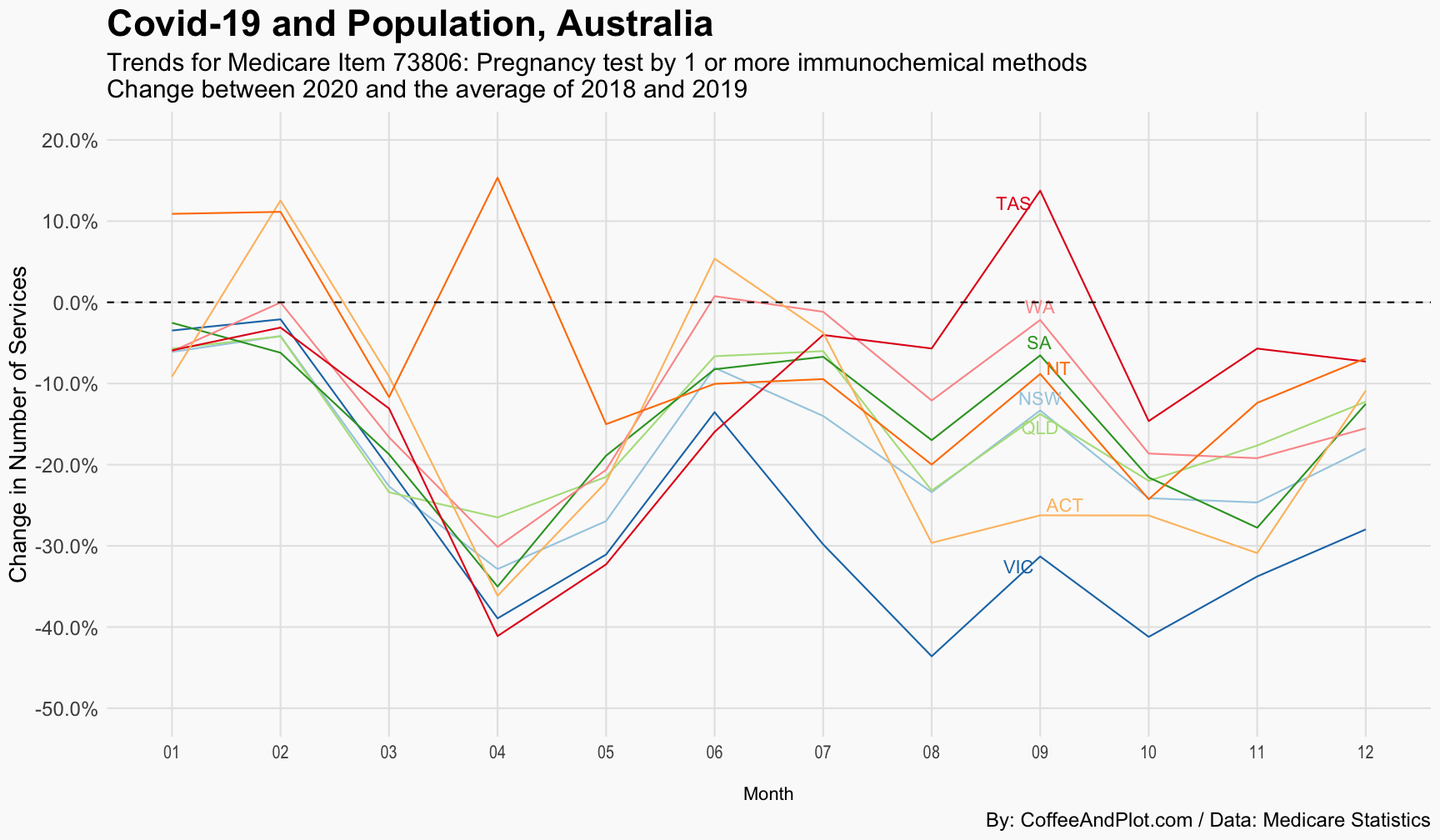 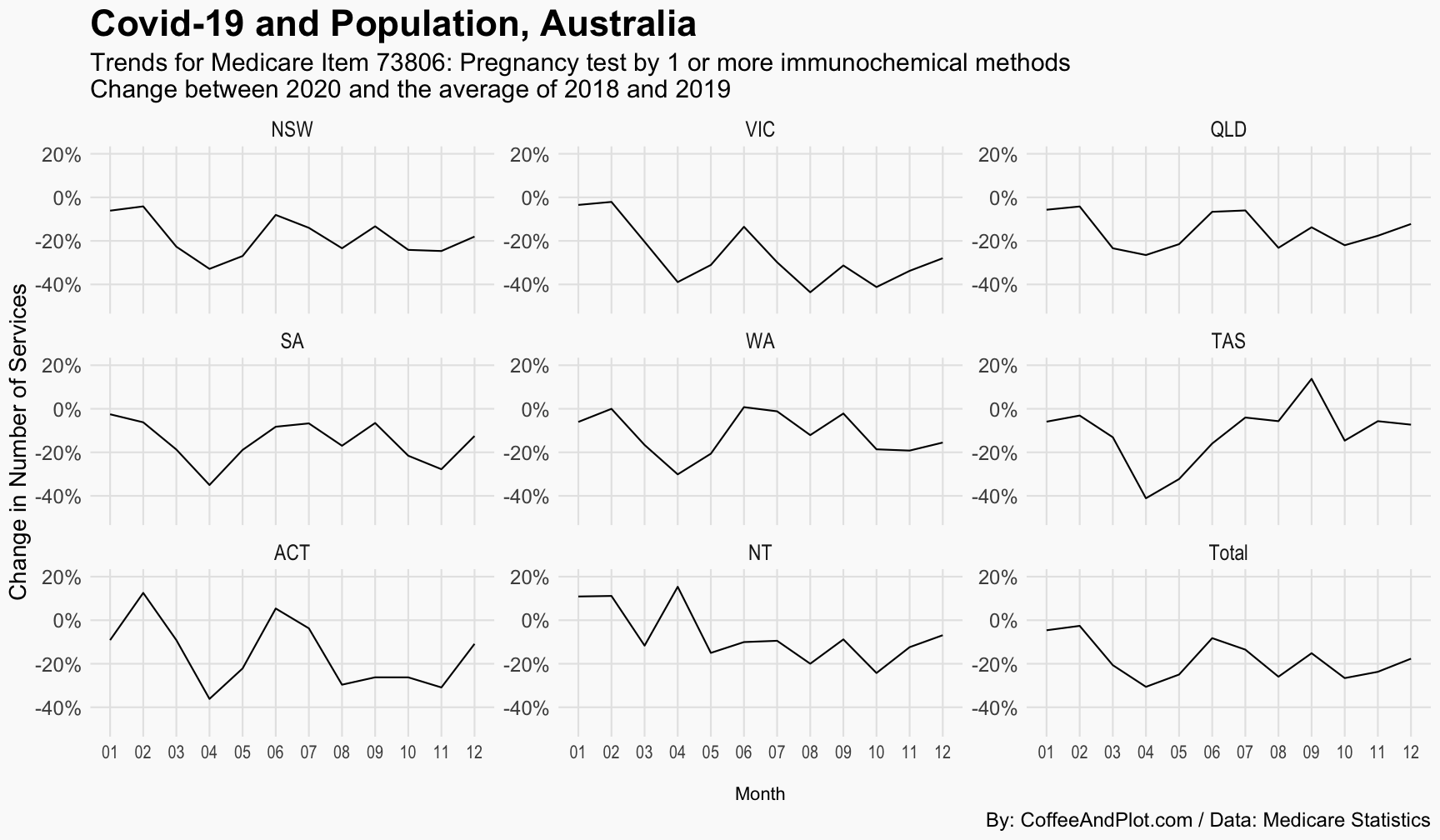 Now, the challenge with the monthly trends is that you cannot easily find out what the overall/cumulative impact is. In the next few plots, I will try to give you a full-year perspective into the overall impact of the pandemic on pregnancy tests. First, let’s have a look at a plot that shows the cumulative number of tests over each year. 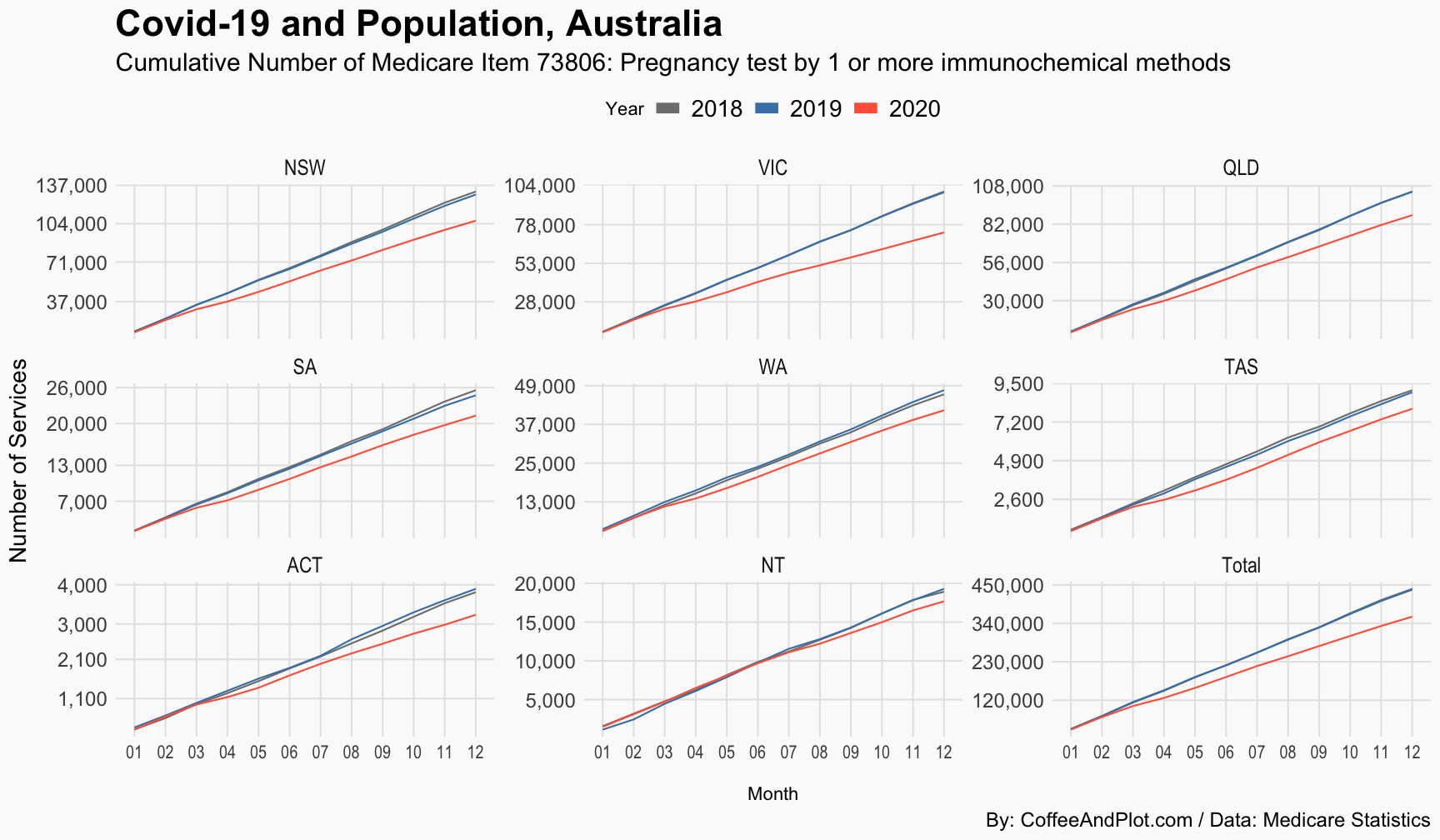 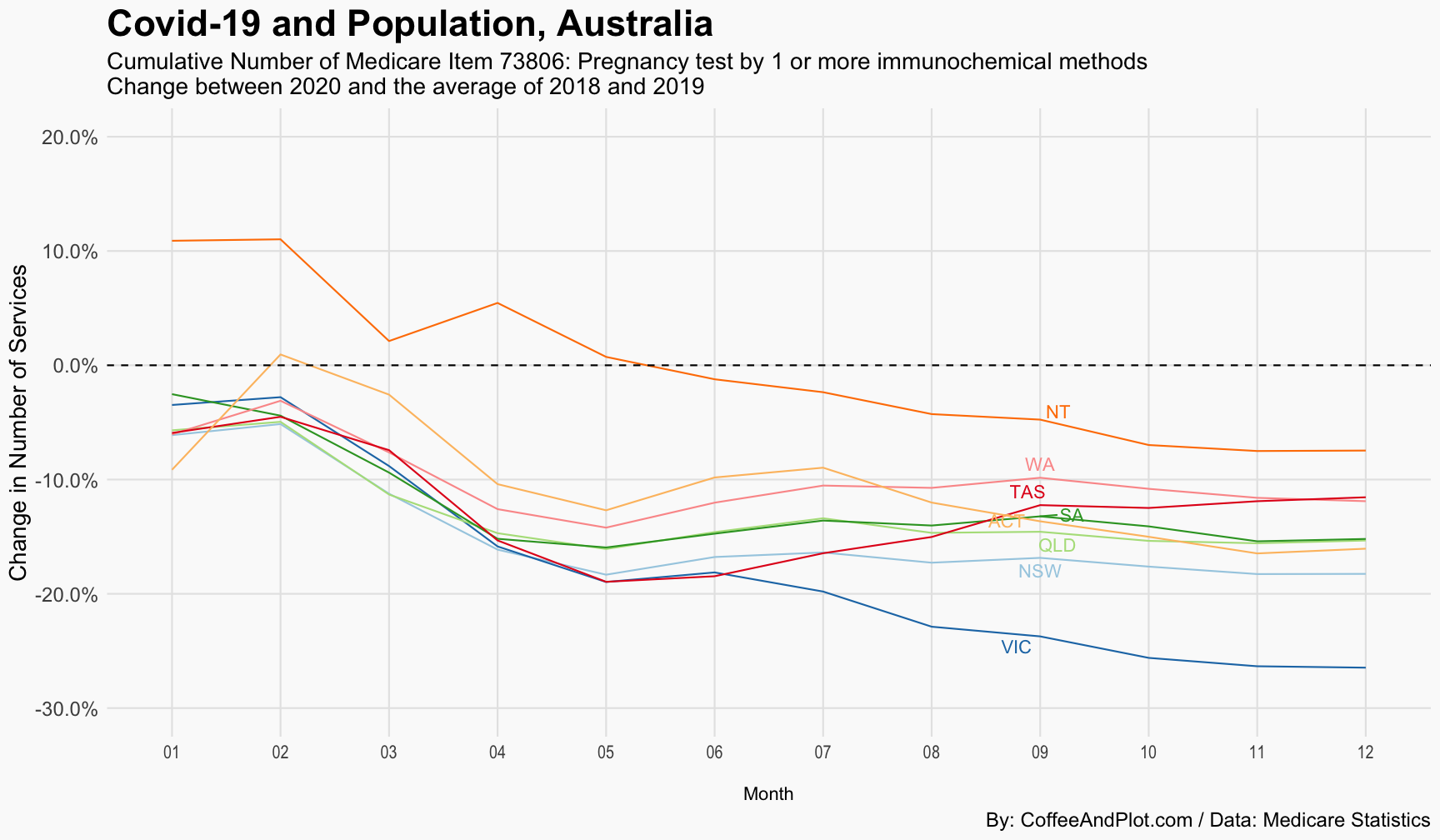 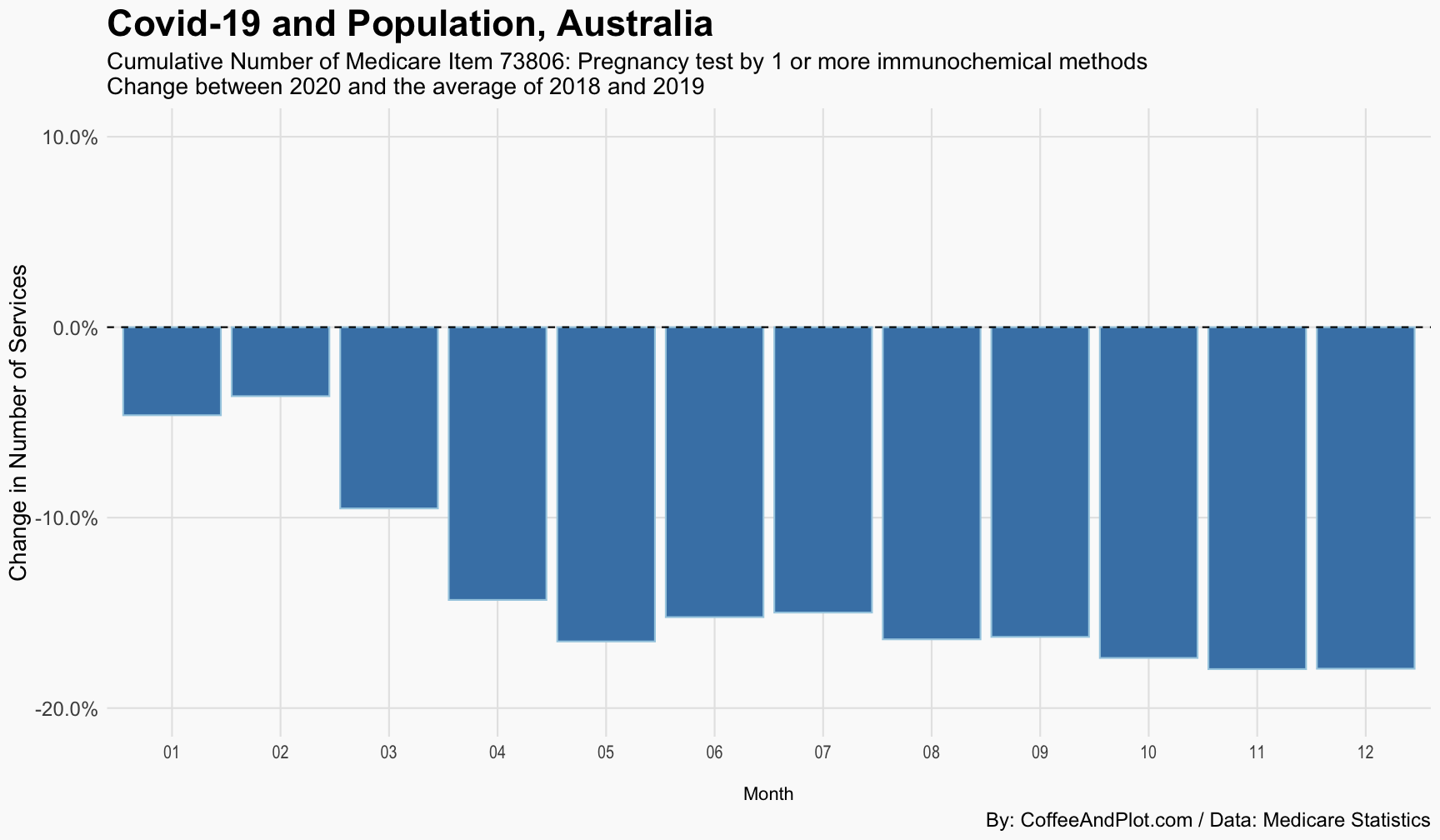